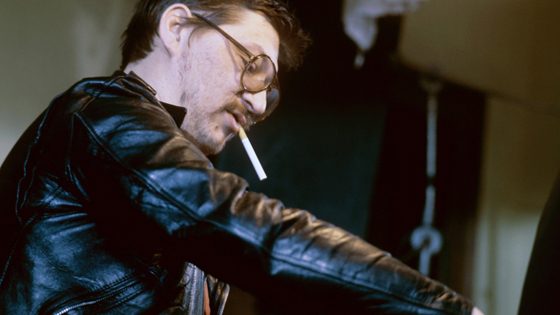 It opens with the text on history of the reception of Fassbinder in Russia — ‘The Sranger RWF‘ by Alexei Gusev. Another opening feature is RWF’s Alphabeth — a dictionary of notions and motifs pivotal for his films. Topics such as ‘pain’, ‘woman’, ‘mirror’, or ‘Utopia’ are presented as quotes from the issue’s texts.

The issue is centered around a collection of articles on Fassbinder’s films: we write about all his 43 works, and among our 32 authors are not only film critics, but also philosophers, drama theorists, and other humanitarians. They are people of various ages, artistic interests and mindsets.

Lyolya Nordic tells the story of RWF’s first steps: his two preserved short films and Rio Das Mortes. Tatyana Alyoshicheva has written about his debut Love is Colder than Death, and his TV  Eight Hours Are Not a Day. Literary critic Igor Gulin has prepared a text on Katzelmacher; drama theorist Gennady Avramenko analyses The Coffee House, and Dmitry Mamulia, director and the founder of Moscow school of new cinema, looks at his favourite film by Fassbinder, Why Does Herr R. Run Amok?

Some texts have been written by new authors. One of them is Oleg Gorainov who looks at cinema through the prism of political philosophy. He has chosen to write about The Niklashauser Journey. Poet Alexandra Tsibulya ponders on The Stationmaster’s Wife. Pioneers in Ingolstadt and Bremen Freedom are analysed by young film critic Maria Scherbakova. The text on Whity is Alexander Podbornov’s debut.

Of course, our contributors have also sent their texts. Aglaya Chechot has written on The Bitter Tears of Petra von Kant; Ksenia Rozhdestvenskaya has chosen Jail Bait and Fox and His Friends; Boris Nelepo has analysed the film World on a Wire, and Alexei Gusev has taken on Martha and Despair. Film theorist Oleg Kovalov writes about Lola and The American Soldier; another text on this film has been created by art theorist Arkady Ippolitov. Beware of a Holy Whore and Effi Briest have been covered by Vasily Stepanov, and The Merchant of Four Seasons — by Alexey Artamonov. Andrei Kartashov writes on Gods of the Plague.

Poet and psychoanalyst Elena Kostyleva comments on Satan’s Brew and the writer who is falling deeper and deeper into madness, while identifying himself with the mystical poet Stefan George. There is more poetry in the issue: Konstantim Shavlovsky is searching for new critical forms in his tale of In a Year of 13 Moons.

Music and theatre critic Alexandr Ryabin writes on RWF’s documentary Theater in Trance. Film historian Maxim Semenov analyses Mother Küsters’ Trip to Heaven, and a leading Russian festival curator Alexey Medvedev studies Fassbinder’s idea of fear using Fear of Fear as an example. Of course, the issue on Fassbinder has to include Marxist authors: Oxana Timofeyeva dissects the dialectics of love in Ali: Fear Eats the Soul, while Alexander Pogrebnyak breaks down the economic basis of I Only Want You To Love Me and Veronika Voss.

The remaining articles of the block have been written by famous Russian film critics. Alexei Vasiliev studies Querelle and I Only Want You To Love Me; Vladimir Lukin looks at Chinese Roulette; Andrei Plakhov analyses Lili Marleen; Vladimir Lyaschenko writes on The Third Generation; Nailya Golman has chosen Women in New York, and Inna Kushnaryova has written on Berlin Alexanderplatz. We also publish the translation of Fassbinder’s article on the Alfred Döblin’s original novel along with Inna Kushnaryova’s text.

The section ‘Rapprochements‘ is dedicated to people pivotal for understanding Fassbinder: Douglas Sirk, Bertolt Brecht, Antonin Artaud, and the context of the ‘new German cinema’.

The essay ‘Imitation of Life. On Douglas Sirk‘ was written by Fassbinder himself after he saw a small retrospective in Munich. It was there that he discovered Sirk’s cinema that profoundly influenced his own films. He describes his impressions of the six films he saw in detail.

In his text ‘Fassbinder and Brecht: on the policies of influence and practices of carrying on‘ Oleg Goryainov ponders on the connection between the two authors — an obvious and at the same time dubious connection. He traces several lines of a possible analysis of the rapprochements and differences between their critical art projects, while trying to avoid the false ‘sense vs sensibility’ binary in his approach to how body and gestures function in the works of both authors. This trend is supported by Alexei Gusev in ‘Spasm as a Trance‘ that analyses differences and similarities between Fassbinder and Artaud.

The metaphor of the mirror is in the centre of Andrei Kartashov’s ‘Fassbinder and the ‘new German cinema’: in a corridor of reflections‘. He unveils the aesthetical and political context of the ‘new German cinema’ and shows how the two main trends represented by Wim Wenders and Margarethe von Trotta converge in Fassbinder’s cinema. This article is supplemented by another text by Oleg Goryainov, ‘Fassbinder, Schröter, Schmid: on the political problem of kitsch‘, where he puts RWF’s work against more marginal directors of the ‘new German wave’who used kitsch as an instrument of political criticism.

In this block, some of Fassbinder’s constant crew talk about him — as does RWF himself.

This section opens with an interview with Juliane Lorenz who edited his later films and is the head of the Fassbinder Foundation. The title of the interview is ‘You must be a dictator. You must be an architect‘. Together with Andrei Kartashov, they discuss how the reception of Fassbinder has evolved inside and outside Germany, along with his work methods and the Fassbinder Jetzt exhibition organized by the German Film Institute and the Fassbinder Foundation on the director’s 70s birthday. Fassbinder’s cinematographer Jürgen Jürges tells Zoe Popova in his interview titled ‘There’s never enough light‘ how they worked on Ali: Fear Eats the Soul, Satans’ Brew and Effi Briest — and how Fassbinder built his relationships with his crew.

Why is Fassbinder important for the modern Russian context? Have we had our own Fassbinder? Can he appear now? In this section, parallels are drawn between his work and our country’s cultural and political reality.

It opens with an introduction into the European political context of the 70s. Mikhail Trofimenkov describes the historical background of German Autumn. This is a  for the discussion ‘Germany in Autumn. The possibility of a Film‘ where Séance editors Vasily Stepanov, Konstantin Shavlovsky and Alexey Artamonov have taken part along with philosophers Alexander Pogrebnyak and Artemy Magun, slavist Jonathan Platt, poet and critic Alexander Skidan and film historian Mikhail Trofimenkov. Together, they discuss the fate of this collective film and the problems of modern political cinema in Russia.

In her article ‘Everything burns, everything rots‘, Katerina Beloglazova compares Fassbinder to Alexey Balabanov. The Russian director is also remembered by Vasily Stepanov and film critic Alexandr Timofeyevsky who wrote pivotal texts on Fassbinder in Russian in the late ‘80s. In their correspondence titled ‘The Possibility of Fassbinder‘, they talk about modern Russia and what is keeping its own RWF from emerging.

The section and the issue are concluded with ‘RWF. Opinions‘ — a collection of quotes from leading Russian directors of various generations on what Fassbinder’s cinema and RWF himself mean for them.